What makes Austin so special? The Salt Lick? Austin City Limits? The University of Texas? All of the above? Well, yes, Austin is unique because of all that, but there is much more to Austin than the “touristy” attractions.

Yes, I know I sound like a hipster. “Going there is too mainstream! Go here instead!” But Austin has so much more to offer than the places, festivals and activities that everyone talks about and publicizes on a regular basis. As austintexas.org puts it, “the city is buzzing, and people are taking note.” Austin is alive with so much activity. As Austinites, we should really get to know all the places, festivals and activities that makes us so uniquely “weird.” But take time to get to know the real Austin so you can fall in love with our city all over again.

The Cathedral of Junk rises from the dirt above the rooftops of a quiet residential neighborhood in South Austin. Photo by Mary K. Schaffer

Instead of:
The Austin Museum of Art
Check out:
The Cathedral of Junk

The Austin Museum of Art houses a wonderful collection of modern and contemporary art. It features artists from all over the world, opening up the art world to Austin. But it’s also kind of stuffy. And you can’t touch the art.

Go to the Cathedral of Junk on Lareina Drive, and you’ve stepped into a whole new world filled with flickering TV sets, broken Barbie dolls and tattered student IDs, all seamlessly worked into a towering clubhouse framed with crutches, wire and metal pipes. The artist, Vince Hannemann, adds to his yard art sculpture day by day, opening it to the public 365 days a year, allowing them to wander through a weird maze of forgotten junk. “Didn’t you ever make a clubhouse when you were a kid? I made tree houses, but I used junk because it’s a lot cheaper,” Hannemann says. “That’s what I do here.”

Hannemann’s clubhouse is what Austin art is all about — weird, unconventional, out-there art that draws the public in because of its fundamental contrast to conventional “art,” while a totally laid-back barefoot dude ushers you inside his creation. You can walk around in this art. You can touch it. You can even live in it. 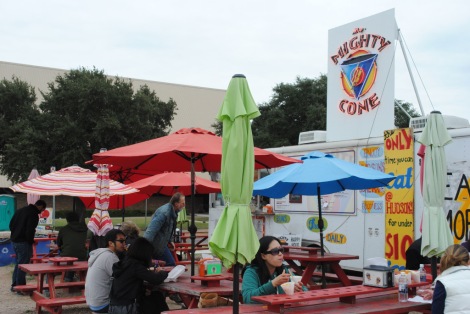 Visitors enjoy food from the Mighty Cone trailer on a cold day in Austin. Photo by Mary K. Schaffer

Instead of:
Salt Lick Bar-B-Que out in Driftwood
Check out:
G’Raj Mahal Cafe on Red River or the food trailers on South Congress

Everyone goes to the Salt Lick — that’s why there’s an hour-long wait to just get a table. The atmosphere is cool, with twinkle lights and big mesquite trees, but every Austinite I’ve ever met raves about it. Go support the food trailers on SoCo and try their awesome food, such as spicy fried chicken and avocados with mango cole slaw in a tortilla cone. It’s in a cone. It’s weird!

G’Raj Mahal Cafe also deserves some more attention, if for no other reason than its really creative name. But it also houses Austin Bike Zoo’s rattlesnake bike. Wait, it houses what? A rattlesnake bike, on which about 10 people can pedal around downtown. G’Raj Mahal’s tasty Indian food and B.Y.O.B. policy make it a great spot to get to know the locals. “They have a snake bike,” psychology major Sarah Bright says. “It doesn’t get much better. It’s pretty chill, and the food is delicious.”

Instead of:
Amy’s Ice Cream
Check out:
Gourdough’s

Amy’s Ice Cream is awesome if you want a show. Order your flavor and watch the ice cream artists flip your scoops up high in the air before catching them with ice cream scoopers to neatly plop them in your cone.

But if you want a spectacle, head to Gourdough’s, where the donuts are topped and filled with everything imaginable, from fried chicken and honey butter to bananas and potato salad. When you order a donut for the first time and feel your eyes widen at the decadence before you, you know that heaven has reached down to hand you a glorious gift, wrapped in fried gooey goodness. Think bacon donut with maple syrup icing. At Gourdough’s, you don’t just get a donut; you get a uniquely Austin experience — and a very full tummy.

Instead of:
Catching a movie at the Alamo Drafthouse
Check out:
What’s playing at the old Paramount Theater on South Congress

The Drafthouse is unique in that it offers full meals, drinks and desserts to enhance any moviegoer’s experience. But so what? You’re eating while watching a movie. You do that at home.

Try watching a different kind of movie at the Paramount theater which, during the summer, shows classic films such as Lawrence of Arabia, Gone with the Wind and Casablanca. We didn’t grow up with these kinds of movies, so place yourself in another generation’s movies and marvel at the simple yet powerful narratives that outline tragic, heart-wrenching and even comedic stories of war, love and life. Take advantage of one of the widest collections of classic movies. Watch a movie you’ve probably never heard of at an old-fashioned “cinema house.” Go on — it’s only a bus ride away! 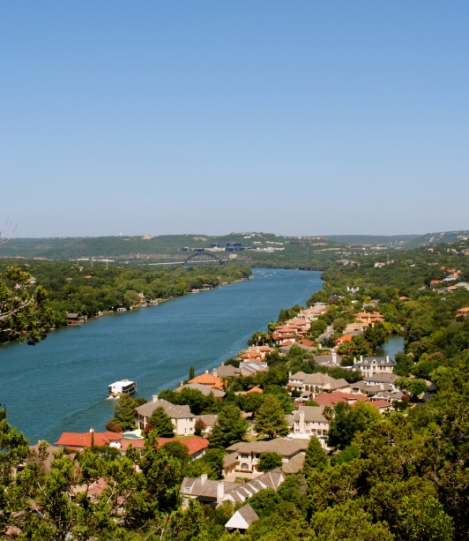 The glorious view from atop Mt. Bonnell. See the Capital of Texas bridge in the middle? Photo by Mary K. Schaffer

Instead of:
The Capitol and the University of Texas
Check out:
Mt. Bonnell or the Capital of Texas Bridge for spectacular views of Austin

The Capitol and UT are cool things to see in Austin because they are major parts of our city, and all the decisions that affect our state happen in the Capitol. But honestly, the Capitol is just a building and UT is just a bunch of buildings. Every state has them both.

For sight-seeing, head to a place that offers real sights. Try Mount Bonnell, which is surprisingly close to campus — only a 10-minute drive up Guadalupe. The park offers a scenic view of the Austin skyline and is a perfect spot to catch the sun rising or setting over our own corner of beautiful Texas. You do have to hike a little bit to get to the top, but the views and fresh air are worth it. It’s also a great date spot. And it’s completely free. So why not?

If you’re looking for smaller music festivals, try Fun Fun Fun Fest, although every Austinite should experience the glory of ACL at least once. Photo by Mary K. Schaffer

Festivals are a bit different. Any Austinite should try them all because they’re all uniquely Austin. However, in keeping with this article’s lean toward lesser-known, more unconventional Austin activities, try the Bat Festival or Fun Fun Fun Fest instead of Austin City Limits or SXSW.

ACL is huge. I’m talking 75,000-people huge. It’s full of great music, food and friends, but the crowds push and shove a little too much, especially as the weekend’s headliners prepare to take the stage. Fun Fun Fun Fest, on the other hand, offers a smaller-scale experience of discovering growing underground artists. “Artists at Fun Fun Fun Fest are growing, whereas at ACL, artists are established,” says government junior Jeanette Lachman, who has volunteered at both festivals for the past two years. “It’s just a different type of crowd. They are willing to hear anything and everything, whereas people at ACL want to hear big names.”

The Bat Festival is just weird. What city celebrates being known for its bats? Apparently, weird Austin. If you haven’t made it down to the Congress Street bridge in August to watch the bats take flight, you’re missing out on a weirdly eerie spectacle. A hush falls over the waiting crowd as hundreds of black shadows rustle in the night, making their way elsewhere. It’s so strange, it’s awesome. It’s Austin.

Austin has a lot to offer. Don’t get caught in the “tourist trap.” Find out what really makes your city tick. Fall in love with Austin all over again, every day.