Published in Orange Magazine, the University of Texas at Austin’s student magazine. 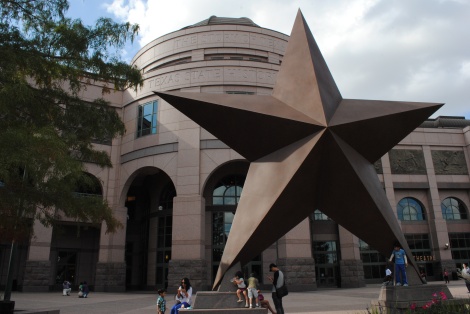 The Bob Bullock Texas State History Museum stands tall and proud, much like Texas does among the United States. The ode to Texas history and culture is on the corner of Martin Luther King Jr. Boulevard and Congress Avenue, just across the street from the University’s own Blanton Museum. As if you weren’t proud enough of your state already, spend some time on a Saturday afternoon learning about the real Texas, through vivid imagery, detailed exhibits and interactive portions of the museum.

The museum tells the grand story of Texas, from its creation, to its annexation, to its modern identity, all divided into three floors, each telling a different part of Texas’ story. The first floor focuses on land and how Texas grew as a geographical region, painting the picture of the struggle between the Native Americans and the colonizing French and Spanish missionaries and soldiers. “This floor really tells the story of how these cultures meshed and didn’t mesh,” says Jim Miller, a retired college professor from Pennsylvania who has volunteered at the museum for three years.

On this floor, you can walk into a starter home pioneers built as they set up homes on the new frontier, walking on wooden floors and underneath a shallow roof. You can also walk into a Native American teepee, tall and made of painted buffalo hide, and see how the people who walked this land before us lived. Their stories are drawn on their homes, for us to read.

The second floor tells the story of how Texas searched for an identity as it struggled to gain independence from Mexico and later debated annexation to the United States. “It really deals with who Texans were,” Miller says. “‘Are we Texicans or Tejanos?’ they wondered.” On this floor, the ground beneath your feet changes. One minute, you’re walking on carpet, the next on concrete, then wood, as you walk on a street or through a cotton-bearing ship from the Civil War. How cool! Texas’ growing sense of separateness becomes apparent as you walk through the state’s struggle to define itself first as an independent nation, then as a state in the United States, finally culminating in the big Texan centennial celebration in 1936, 100 years after Texas gained independence from Mexico.

The third floor concerns how Texas handled new opportunity, on land, in sea and in air. This floor tells the story of Texas oil and cotton and how Texas grew to become a center for military activity. This was the time when Texas became a major player in the United States, as people poured money into the oil state in the first half of the 20th century. “The third floor kind of tells you how we became who we are today,” Miller says. “For example, go on up and learn why we have so many military bases in Texas. This was a central hub for the military as they explored the West.”

“I hear a lot of comments from people who have never been here before,” Miller says. “They’ll say, ‘Wow, I never knew so much about Texas.’”

The museum might tell the entire story of Texas, but really, all it does is tell us what we’ve all known from birth: Texas is awesome.

Admission for students is $8 with a valid ID. However, on the first Saturday of every month, admission is free from 2-6 p.m.