Originally published in the March 2015 edition of Texas Parks and Wildlife Magazine.

As my dad and I amble down the main walkway toward the exit of the Santa Ana National Wildlife Refuge in Alamo, he suddenly flings an arm across my path, causing me to freeze mid-step. My eyes follow his to the huge black snake only a few feet in front of us. We nearly trampled a Texas indigo snake, one of the largest species of nonvenomous snakes in the country.

A refuge staffer stands across from us with his arms outstretched to stop visitors from coming any closer to the snake. As its ebony scales glitter in the hot Valley sun, the snake slithers across the concrete path and into the brush that lines either side, its considerable length disappearing in just a few seconds. 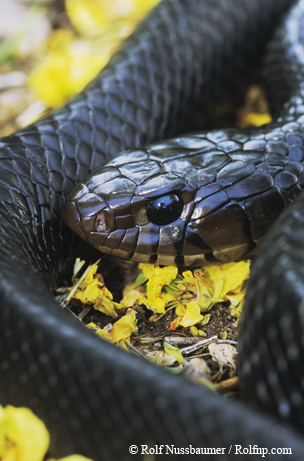 Though it’s called the Texas indigo snake (Drymarchon melanurus erebennus), the snake’s range also extends into northern Mexico. The snake makes its habitat primarily near permanent water sources in the Tamaulipan grassland region of South Texas, although it can also be found as far north and west as the southern edge of the Edwards Plateau in western Central Texas.

Indigo snakes are big snakes. Most adult indigo snakes grow to between 5½ and 6½ feet in length. The longest recorded indigo snake was nearly 8½ feet long.

This snake is actually mottled, with dark brown along its front half. Its name comes from the varying shades of blue-black — or indigo — it displays along the rear half of its body, though such coloration does not usually appear until the snake matures. Juvenile indigo snakes appear to be all black.

Texas indigo snakes are diurnal predators, meaning they are active during the day. Unlike other large snakes, indigo snakes do not rely on constriction or venom to subdue their prey. Rather, they simply overpower it. They will eat almost any vertebrate animal they can subdue with their strong jaws, including toads, frogs, salamanders, lizards, turtles, birds, small mammals and other snakes. One specimen was found with three mice, two Mexican burrowing toads and two juvenile snapping turtles in its stomach.

These snakes are also known to eat rattlesnakes, which can be three to four times heavier than an indigo snake. While they are not immune to rattlesnake venom, they have developed a tolerance for it. Indigoes also eat other snakes, including juvenile indigo snakes if they are not strong enough.

While it tackles tough prey, the indigo snake is not necessarily harmful to humans.

“It’s a gorgeous snake, and it’s not aggressive,” says Andy Gluesenkamp, Texas Parks and Wildlife Department herpetologist. “If you’re nice to the snake, it’ll give you a chance to look at it.”

Like other snakes, the Texas indigo snake is an egg-layer. After mating in late winter and early spring, female indigo snakes deposit the eggs — as few as three or as many as a dozen — in an underground burrow about a month later to incubate until hatching, usually in the early summer.

Texas indigo snakes are listed by the state as a threatened species, due in large part to habitat destruction. In South Texas, one of the nation’s fastest-growing regions and also one of its most ecologically diverse, some 95 percent of the snake’s natural habitat has been destroyed by industrial development and urban sprawl. Because of its protected status, it is illegal to harm, kill, collect or sell Texas indigo snakes.

The Texas indigo snake is revered in South Texas, where many ranchers are aware of its propensity for eating predatory rattlesnakes.