On Earth Day, April 22, Wildlands Network staffers and friends gathered with thousands of citizens in Salt Lake City, Seattle, and Washington, D.C. to express support for science-based decision-making in conservation and policy. More specifically, we participated in the March for Science to support reason, fact, logic, and sound science as guiding principles in large-scale conservation work.

Raise Your Hand for Science

In Washington, D.C., Wildlands Network’s Policy Director, Susan Holmes, marched with her 2 young daughters. Though rain fell from the sky, weather didn’t dampen the spirits of the impassioned participants. Earth Day 2017 was a great day for science and young advocates.

“What really surprised me,” Maggie said, “was the incredible turnout, considering how miserable the weather was. We were completely soaked to the bone, yet thousands kept pouring into the National Mall. It was inspiring to be around so many people from different places with different backgrounds, some of them scientists, others just concerned citizens, all of them wanting to see science restored, funded, and viewed without a political lens.”

Meanwhile, Katie Davis, Wildlands Network’s Western Program Director, marched in Salt Lake City, where the people of Utah showed up in force. Check out the crowds, the energy and the excitement to stand up for science at the Salt Lake City march on our Facebook page.

Utahns showed up in force at the Salt Lake City March for Science. Photo: Katie Davis

And in Seattle, where our main office is based, thousands of outdoors enthusiasts and science supporters passed within chanting distance of our office.

Seattle is chock-full of outdoor enthusiasts who recognize the value of science in protecting wild places. Photo: Robert Long

Science is key to understanding how Earth’s diverse life forms, including our own, interact with the landscapes they inhabit—and how we must work together to halt the mass extinction crisis and climate change. We must keep chanting until our policymakers listen.

Science is integral to our organization. Twenty-five years ago, Wildlands Network was founded by prominent conservation biologists who recognized that scientific evidence demanded a much more extensive, continental-scale approach to protecting biodiversity.

Wildlands Network has since become a leader in conservation science. For instance, we’re several years into a long-term camera-trapping project in the red wolf recovery area in eastern North Carolina. Our photos refute the uninformed claim that wolves are decimating wildlife in this area. 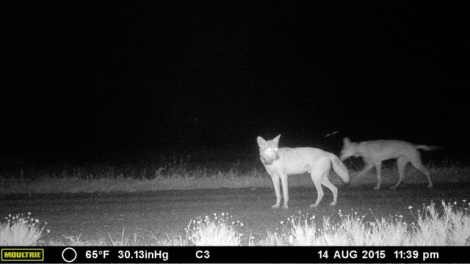 Science-backed research was also the driving force behind our work with Congressman Don Beyer to introduce the Wildlife Corridors Conservation Act in Congress. The bill, supported by nationally recognized scientists and prominent conservation organizations nationwide, will help protect and restore native wildlife and create more resilient landscapes across America.

This week, we encourage you to get involved in the March for Science’s Week of Action, April 23-29. Learn how science engages, discovers, empowers, communicates, advocates, and connects. Tell the President of the General Assembly of the United Nations why he should support scientific institutions and science-based policies.

As Wildlands Network marches forward in our passionate pursuit of a reconnected and rewilded North America, we will continue to rely on science to steer our critical conservation work.