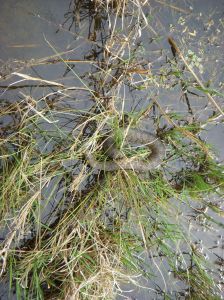 A water snake coils itself around the reeds in the coastal wetlands of Santa Ana National Wildlife Refuge. Photo: Katy Schaffer

I tore my gaze away from the tendrils of Spanish moss dangling from the twisted mesquite trees and ran to my dad.

“There,” my dad said, pointing over the railing and into the water. “It’s a water snake. How wild.”

It pains me to think that the U.S.-Mexico border wall could destroy those trees, that snake, and every other wild being that calls the Santa Ana National Wildlife Refuge home.

I don’t remember the time of year, but I know it was hot. Like sweltering hot. Like drenched-in-sweat-the-minute-you-step-outside hot. Then again, it was South Texas, so it was always hot. 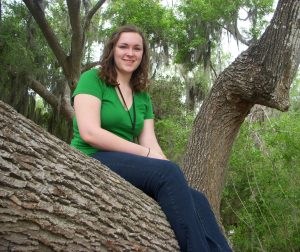 I sit on a low branch of a mesquite tree at Santa Ana National Wildlife Refuge. That strap around my neck is tied to my camera. Photo: Steve Schaffer

I must have been about 15 years old. My dad and I had wandered into the Santa Ana National Wildlife Refuge, 10 miles southeast of our home in McAllen, Texas, seeking the solace of nature within the refuge’s 2,088 acres. We’d been out on one of our weekend exploratory missions, traveling the Rio Grande Valley’s back roads until we found something worth stopping for.

We entered Santa Ana under the canopy of tall mesquites, leaving the noise and dust of the backcountry highway—and the cool of our air-conditioned car—behind. The air was quiet and thick. A steady buzz of insects thrummed in the background. Every now and then, a birdcall pierced the stillness.

I’d never been to Santa Ana before. Situated along the banks of the Rio Grande River, it’s one of the world’s premiere birding destinations—sitting at the juncture of 2 major migratory bird routes. Avid birders can find over 400 of Texas’ 520 bird species inside the refuge boundaries.

As my dad and I walked on, the refuge felt like a jungle, with moss dripping from every tree. Hidden birds called to each other, and snakes wended across the paved pathways. On that special afternoon, I recall seeing a small coral snake.

I’ll never forget how Santa Ana entranced me. Strolling along its shady paths, I sensed wildness all around. I knew there were bobcats, jagarundis, armadillos, and endangered ocelots slinking through the forest; I couldn’t see them, but they could probably see me. I knew wild nature reigned in this South Texas forest.

I returned to Santa Ana many times after that, and it came to play a special role in my early adulthood. At Santa Ana, I discovered my love for wild creatures and wild places, as well as my passion for photojournalism, all of which has informed my career goals. It’s difficult to imagine a Rio Grande Valley without the chacalacas, ocelots, and other wild creatures of Santa Ana National Wildlife Refuge.

A Treasure No More?

Today, my beloved Santa Ana National Wildlife Refuge is under immediate threat from the Trump Administration. If the 2018 federal budget were approved, 3 miles of new border wall would bisect the refuge, cutting it off from its visitor center and the remainder of our country.

In fact, federal officials are already preparing for the possibility of constructing sections of the wall at Santa Ana. The U.S. Army Corps of Engineers drilled for soil samples just last week.

If the wall were funded in next year’s budget and built along these proposed areas, tragedy would be imminent for the wildlife that call these borderlands home—especially in the Rio Grande River floodplain. 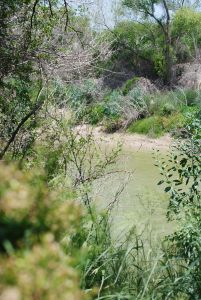 The Rio Grande River, visible just beyond the visitor pathway. If this river floods again, every animal at Santa Ana National Wildlife Refuge will be in danger. Photo: Katy Schaffer

Blocking the levees in this area could trap animals during a flood (as happened in 2010 during Hurricane Alex, when the refuge was under water for 4 days). Some animals wouldn’t be able to escape the Rio Grande.

Even if the area weren’t at risk for flooding, the wall still poses dangers to wildlife. The rare and endangered ocelot, which calls South Texas home and roams freely in the Santa Ana National Wildlife Refuge, could be severed from part of its habitat—which includes mates, food, and the life-giving waters of the Rio Grande River.

What’s more, the wall would effectively prohibit public access to the refuge, barring local residents and tourists from visiting this South Texas treasure. Having discovered my love of nature and nature photography at Santa Ana, I can’t imagine not allowing others to experience the refuge’s natural, wild beauty. I also can’t imagine destroying this premier birding destination, this safe haven for endangered animals, this enchanting tangle of moss and trees. But that’s exactly what could happen if the wall is built through the refuge.

For these reasons, the border wall fundamentally counters Wildlands Network’s mission to promote human coexistence with the land and its wild inhabitants.

Our connectivity goals—essential to the health of our ecosystems—depend on protected wildlands like Santa Ana National Wildlife Refuge as the building blocks of wildlands networks across the continent. Such expansive, wild spaces give carnivores and other wide-ranging animals room to roam freely, while also facilitating the natural processes like fire, carbon storage, and animal migrations that keep our planet alive and well.

Wildlands Network is committed to protecting and connecting public lands across North America so that life in all its diversity can thrive. We can’t functionally reconnect these lands if they aren’t protected from political interests.

Read More About the Wall and Santa Ana

The Time to Act Is Now

Wildlands Network—along with nearly 90 other environmental, faith, immigration, and civil rights organizations on both sides of the border—staunchly opposes the continued construction of the border wall. Not only is it an ineffective solution for managing border migration, it will irreparably harm the unique biodiversity of South Texas and other areas along the borderlands. 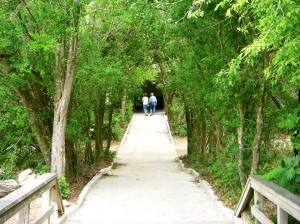 If the wall is built through the refuge as planned, the visitor center would be cut off from the rest of the refuge, thereby preventing public access to this special place. Photo: Katy Schaffer

Wildlands Network is working toward a future for wildlife and for humans. We believe the funding allocated for the border wall would be better spent building wildlife bridges across the border, like transportation agents are already doing along Highway 2 in Mexico. In doing so, we could save thousands of human and animal lives every year.

To join us in speaking out against the continued construction of the border wall, sign our petitionthat urges Congress to vote NO on funding for the wall. You can also contact your own representatives today with the same important message.

Tell them the wall will be ineffective. Tell them it will irreparably damage the habitats of some of our most endangered and treasured wildlife. Tell them the wall is a sign of animosity to our fellow humans in Mexico. Tell them we should build bridges, not walls.Tell them to protect special places like Santa Ana National Wildlife Refuge for generations to come.

Who knows? There could be a young girl visiting the refuge right now, camera in hand, discovering nature’s majesty for the first time. It would be such a shame to take that opportunity away.